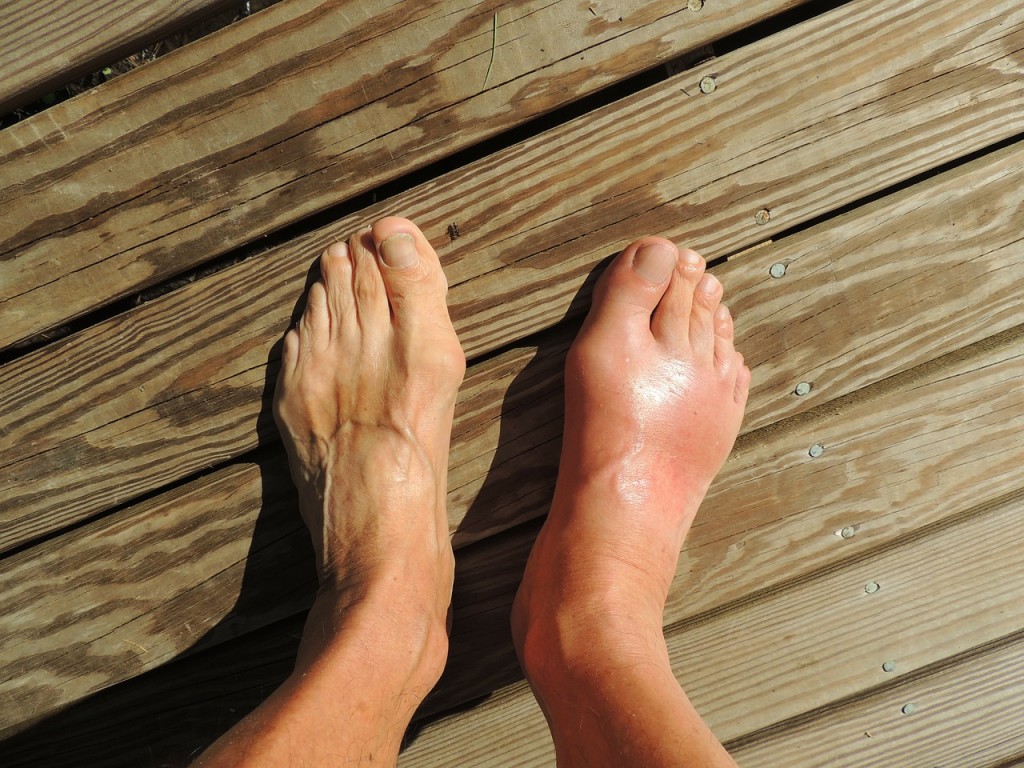 Gout is the most painful form of inflammatory arthritis, caused by needle-like crystals of uric acid collecting in the joints, swelling them up so painfully that at first you might think you’ve broken a bone.

High levels of uric acid in the bloodstream almost always points to damage within the kidneys, making it difficult for them to eliminate toxins that should be leaving your body every day.

Diabetes and being overweight are the two biggest instigators of gout. Other causes – usually in conjunction with the first two – include heavy use of diuretics, rich foods that can’t be processed, and long-term overconsumption of alcohol

For short-term attacks, doctors usually suggest trying an over the counter medication such as aspirin or Alleve, naproxen or ibuprofen, but these solutions can cause stomach pain, ulcers, and liver damage in the long run. Corticosteroids are sometimes be prescribed for the most painful attacks, but again, long term use of this solution can affect your blood sugar levels, adding more damage to the already struggling kidney function.

One of the most popular medications for gout, Uloric, was recently the target of a campaign to have it taken off the shelves due to a death risk. As of this writing, the product remains on the shelves but has acquired a stern new warning of side effects on the box.

With all these dangerous side effects haunting the treatment of the most popular medications, it seems almost like you’d have to choose the lesser of three or four painful (or even deadly!) evils just to get some relief.

If only there was an alternative treatment, one that carries no side effects or risk of death, and one that has been relieving the symptoms of gout for almost as long as people have been complaining about it. Maybe something like…

Considering all the known benefits of acupuncture for the treatment of osteoarthritis, diabetes, liver and kidney functions, it seems obvious that people would eventually figure out that all the problems associated with gout could possibly have the same root treatment. Enter acupuncture.

A 2016 study of over 2000 patients ranging in age from 18 to 80 years old concluded that acupuncture is an effective, safe therapy for patients with gouty arthritis, and that acupuncture alone was more effective in the improvement of pain and uric acid when compared with standard western medicine.

Another study found that Acupuncture is more effective than a popular drug for the treatment of gout, and that improvements in clinical symptoms were significantly greater in the acupuncture group – 86.96% – compared with 69.57% in the drug group.

A third, smaller study found that their acupuncture-only treatment group had a total treatment efficacy rate of 92.5% recovery. The western-medicine-only group had 84%.

So before you reach for that bottle of Alleve or worse, grab that box of Uloric off the shelf, give acupuncture a try for the safe, non-deadly treatment of Gout.